Escape Between the Pages Book Review 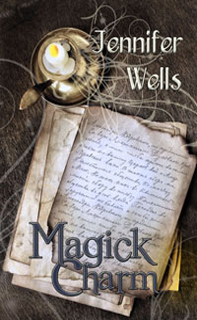 Title: Magick Charm Author: Jennifer WellsPublisher: Crescent Moon Press
Published: September 2010
ISBN#: 978-0984180509        My Rating            ★★★
Janie Adler likes her quiet, orderly life reviewing books for a small New Orleans newspaper exactly the way it is. So what if Duke Hot Pants, the hero of her favorite romance novel, is the only man in her life? She has a Pulitzer Prize to chase. That is until her quirky twin sister Rachel moves in, bringing boyfriend drama, a smelly ferret, and irrational belief in all things magickal along with her. Persuaded by a local voodoo priestess-and maybe one margarita too many-the twins cast spells to improve their love lives. Loser-magnet Rachel focuses on avoiding the wrong men and Janie seeks her romance novel ideal. While plenty of eligible bachelors flood into their lives, Janie only has eyes for her coworker who lives in the apartment downstairs and works in the cube next to her. But the twins soon discover the incantations' many unintended-and dangerous-consequences. The increasing number of mishaps and misfortune putting the sisters in grave peril seems more like the work of a curse. Can Janie and Rachel's "twintuition" save them from the menace stalking them?
My Review:Janie and Rachel were twin sisters who were completely different. Rachel was carefree, in a band, outspoken and made bad judgements, especially when it came to men. Janie was predictable, reviewed books, hard working, and reliable. But, she was a push over  - especially for those who would take advantage of it, including her sister. For example, Rachel just assumed it would be alright to move in with her. Then, tired of making bad choices in men, Rachel encouraged Janie to help her perform a spell, to give her good judgement. Against Janie's better judgement, Rachel also wanted to find a love match for Janie. But for some reason, the spell went wrong, and strange things began to happen. Ex-boyfriends enter back into thier lives and someone began stalking Rachel. In order to figure out who it was, the girls switched identities.
How cool would it be to have a twin? I like the close relationship between Janie and Rachel, although sometimes thier personalities clashed. It was fun to read two sisters who are so much alike, but so different. Janie wanted Rachel to be more conservative and Rachel wanted Janie to loosen up. I thought it was cute how Rachel manipulated the events in order to get Janie and Ryan together. I thought the chemistry between them was charming and crediable. There definately were sparks...Rachel just felt she needed to put a little fire underneath them. I thought Ryan, the quiet and protective co-worker and neighbor was sweet. It was nice to see a quiet guy still be strong when he needed to be, especially when he stood up to Ben and Ted. I absolutely loved Officer Beaty's character. She was a very no nonsense and blunt female. Although charming, I didn't feel that the plot was completely unique. In some ways, it reminded me of one of those good Lifetime Movies. You know, twins having love life issues, abusive boyfriends, job pressures, and stalker issues so they switch places.  That being said, I do appreciate a good whodunnit. Just when I thought I had it figured all out, it turned out I was wrong and I loved it. But, it could have used more action and suspense. You know a little more Oomph! I felt that the story felt safe. However, what I did find it appealing, was the author wrote it with a fluidity and style of a seasoned author. It was interesting to read how each character grew and evolved in each others shoes, as the story went on. Overall, this was a fun and fast read. Although, the story was considered a paranromal romance, in truth, it only has a subtle element of magic. But, I found the characters to be entertaining, the New Orleans enviroment to be enchanting, and the plot to be intriguing. This was one of those books, you curl up on the couch, snuggled under a cozy blanket, and have your hot chocolate sitting on the end table next to you and read. This is what I call an all around relaxing read - a charming book of comfort.
Cover Art:I absolutely love the mystical look of this cover. I like the earthy colors and the images. I even like the font used for the title.
Posted by Jennifer Wells at 4:17 PM